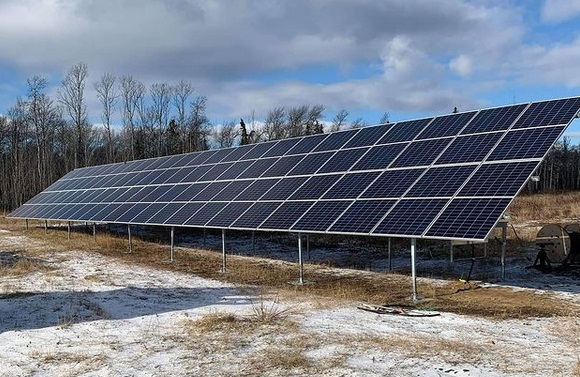 The Yukon Territory is currently ranked the #5 province/territory in the country for installing a solar power system, scoring as one of the best provinces/territories for cash incentives and utility-related factors.

This page contains all relevant information about installing solar in the Yukon Territory including utility policies, system financing, solar incentives, and natural factors – updated as of May 1st, 2021.

The guide begins by answering the two most common questions about solar systems, then it explores each solar ranking factor.

You can read from top to bottom, or skip to your preferred section by clicking on it below:

When thinking about solar power, the first two questions that often come to a person’s mind are:

You can answer these questions in three basic steps:

To determine the size of system that you need, you only need to know how much energy you use during the course of a year. Your monthly Yukon Electrical Bill will show your usage (in kWh) similar to the photo below:

You can calculate your annual energy by adding up the amount shown for 12 consecutive months. Don’t make the mistake of multiplying a single month by 12 – usage fluctuates greatly depending on the season.

You can calculate the size of the solar power system that you’ll need with the following equation:

For example, let’s pretend that you added up your power bills and determined that you use 10,000kWh over the course of a year. You would then do the above calculation and determine that you need a 10.36kW solar panel system!

Now that you know the size of your system in units of kW, you can determine how much space the system will require by converting it to units of sqft.

The average solar panel is approximately 18sqft in size (including some buffer room for racking and spacing) and produces about 300watts of power.

The equation to calculate the space that your solar system require is again simple:

Let’s continue from the previous section and assume that you need a 10.36kW system. You would do the above calculation and determine that you need 622sqft of space to install your system!

If you’re putting solar panels on your roof, you should know that:

If you’re putting solar panels on the ground, you should know that:

Most residential homeowners in the Yukon Territory put solar panels on their roof. Rural property owners put systems on the roof of their house or shop – or on the ground in their yard.

The last piece of basic information that you’ll want to know is an approximation of how much your system will cost. To calculate this, you just need to know the size of the system in units of kW.

The rough calculation is simple. Just take the size of your system and multiply it by the $2.57/watt – the average cost of installing a solar system in the Yukon Territory.

You can calculate your total system costs with the following equation:

Continuing with our previous example, we can see that a 10.36kW system would cost approximately $26,725 to install.

Note that the exact price of the system depends on several factors including the system size, the quality of equipment used, and the complexity of the job.

Even the range in the chart above is just an average – installation prices can easily go as high as $2.80+/watt for premium equipment and high quality installers.

Every year, we score every province and territory in Canada on the relative feasibility of installing a solar power system. This year, the Yukon Territory scores #5, receiving a total score of 67/100.

The remainder of this guide explores each ranking factor individually, while also providing important information about installing solar in the Yukon Territory.

(if you want to learn how we score each factor, please visit our Provincial Solar Rankings page)

The Yukon Territory is one of the few provinces/territories with a large solar incentive program. *However, it is currently only available to off-grid residents.

These factors are important because they reduce the upfront system costs. We’ve scored the Yukon Territory 6/20 for this section.

The largest solar rebate in the Yukon Territory is call the Renewable Energy Systems Rebate – offered through Good Energy Yukon.

This rebate allows off-grid property owners to save $0.80/watt off the cost of a solar system up to a maximum rebate amount of $5,000.

Here is what the savings would look like for a 10.36kW system:

Businesses can now use the Federal Tax Provision for Clean Energy Equipment to fully expense their solar system. This means a CCA rate of 100% and the abolishment of the first-year rule.

There are at least 3 other energy incentive programs available in the Yukon. While not considered in our solar rankings, many homeowners choose to leverage these (i.e., home energy efficiency incentives) around the same time they switch to solar.

The Yukon Territory is one of the worst provinces/territories in terms of the natural factors that influence the maximal amount of energy that a system can produce. We’ve scored the Yukon Territory 14.5/20 for this section.

The Yukon Territory has the second-lowest potential to produce solar energy in all of Canada, receiving less solar irradiation than any other province or territory except for Newfoundland and Labrador.

According to data from Natural Resources Canada, the average solar system in the Yukon Territory can produce 965kWh of electricity per kW of solar panels per year.

Here is how much an average solar system can produce each month, as well as the solar irradiance potential map for Yukon Territory:

Recall that this is the number we used in the System Sizing section!

(maps and solar irradiance data for all other provinces and territories can be found on our Solar Maps page.)

The Yukon Territory scores in front of most provinces/territories when it comes to utility-related factors.

Utility factors determine how much money your utility will pay you for the power you produce, along with how much money you will save on your power bill by reducing your usage. We’ve scored the Yukon Territory 28/30 for this section.

Net Metering is one of the most important policy mechanisms that makes solar a feasible energy generation option.

Net Metering essentially means that you earn credits for the excess energy that you produce, which can then be used at a later time. It’s common to produce excess energy during the day and summer but not enough at night and during the winter – so this policy is important!

Disconnecting from the grid also means that you won’t be able to participate in your utility’s net metering program.

An interesting benefit about micro generation in the Yukon is that the utility pays out at a rate of $0.21/kWh for hydro communities and $0.30/kWh for diesel communities. This means that you can actually make some money by switching to solar – being paid at a rate higher than the retail rate!

Yukon’s micro-generation policy dictates that you don’t need to pay for an interconnection study or a bi-directional meter when you switch to solar power.

This is opposed to many provinces like Saskatchewan and Manitoba, where interconnection and bi-directional meter fees can reach over $1000!

The Yukon Territory is one of the better provinces/territories for solar with respect to electricity prices – higher prices mean higher savings potential.

Based on a monthly usage of 1,000kWh, the average total cost of electricity in the Yukon Territory is $0.187/kWh (this number includes both fixed and variable costs).

This number is higher than the Canadian average of $0.138/kWh (excluding the territories), meaning that property owners in the Yukon Territory have a lot of potential savings!

(methodology and data on other provinces and territories can be found on our Electricity Prices page.)

The Yukon Territory scores in the front of the pack when it comes to these factors – having tiered rates and fixed monthly fees of $15.

Note that fixed monthly fees don’t disappear even if you switch to solar – you’ll pay them as long as you remain connected to the grid. But this isn’t a bad thing – $15/mo is a small price to pay for using the grid as your back-up energy source!

(methodology on our Electricity Prices page.)

The only way to completely remove your fixed costs is to go off the grid, something most homeowners in the Yukon don’t do because of high battery costs.

Disconnecting from the grid also means that you won’t be able to participate in your utility’s net metering program.

Yukon is one of the best provinces in the country when it comes to financial factors because of moderate up-front costs and a partial PACE financing option. We’ve scored Yukon 19/30 for this section.

The upfront cost of installation is obviously one of the largest factors that determine whether or not a person is going to switch to solar. The current average price range in Yukon is about $2.29-$2.81/kW.

(not sure what this number means or how to use it? Jump back up to the Common Questions section.)

However, the price can easily be higher or lower depending on the size of the system, the complexity of the job, the type of equipment used, and even on the quality of your installation company.

In general, aiming for the cheapest price shouldn’t be your goal. Most solar panels are guaranteed to last for 25 years, so you want to make sure that your installation job is good enough to support that.

You’ll also want to be sure that the company you choose will be around in 5 to 10 years from now in case you need service or warranty work done. If you get a quote through us, we’ll connect you with a pre-vetted installer!

Property Assessed Clean Energy (PACE) is an innovative financing option that allows you to cover the entire upfront cost of your solar system (or energy efficiency upgrades) with a $0 down, long amortization period, low interest ‘loan’.

However, unlike a typical loan, this loan is attached to your property (not you) and is paid back on your property tax bill as a Local Improvement Charge (LIC). The only eligibility is that you need to own a certain portion of your home.

The Rural Electrification and Telecommunications Program (RETP) is the name of Yukon’s PACE program. However, this is only available for rural customers who are not currently connected to the grid.

Obviously though, PACE is not the only way to finance a solar system. Systems can be financed by cash, bank loans, installer financing, home equity loans, a home equity line of credit, a mortgage (for new builds), or through energy loans.

Other options for Yukon Territory homeowners:

Because of the Yukon Territory’s financing options, large solar rebate, and moderate electricity prices – we rank YT as being the #5 best province/territory in the country for switching to solar power.

Ready to get started?

Spot an error or have a recommendation? Click here to let us know.

• Use our content online, with a link back to our site.
• Reference us in your paper or presentation.
• Bookmark this page and come back later. :)

energyhub.org is a social enterprise with a legal requirement to operate in a socially, environmentally, and economically responsible way. We offer free resources to consumers and various services to industry partners.