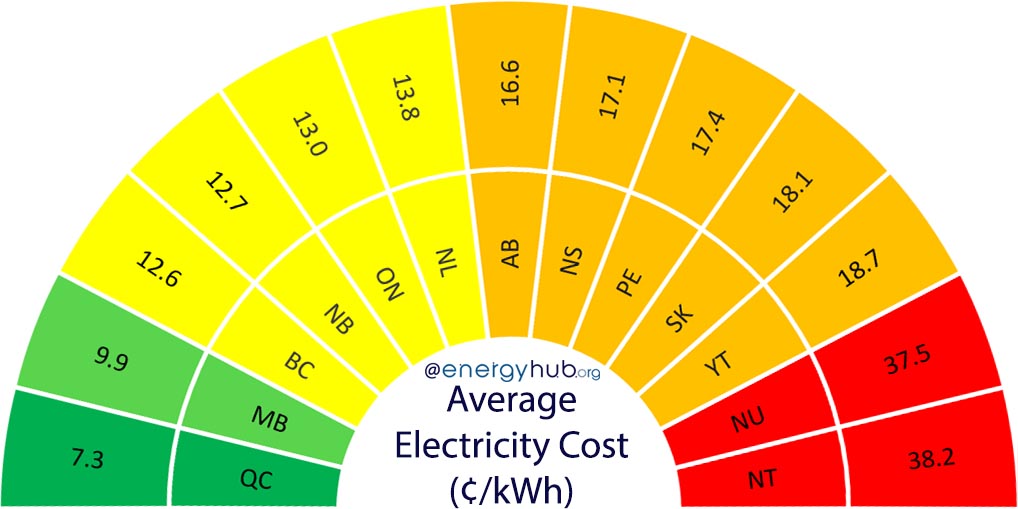 The average residential cost of electricity in Canada is $0.179 per kWh. This includes both fixed and variable costs and is based on an average monthly consumption of 1,000 kWh.

Here is the average total cost of electricity by province, based on a monthly consumption of 1,000kWh:

The tables below show how average electricity prices change based on the amount of electricity that is consumed each month.

Note in the charts above that the average price per kWh goes both up and down (and at different rates), depending on the province you live in. This is because of differences in how electricity rates are designed.

Read the next section (Electricity Bill Rate Design) for more on this topic! See the Methodology and Data Sources sections for details on data collection and calculations.

Check out the first set of charts below to see how fixed monthly fees vary by province, and the second set to see how rate design (including price) affects the total average monthly electricity bill:

Additionally, the majority of provinces have a meaningful portion of their population served by at least 2 utility companies (AB, BC, NB, NL, NT, ON, SK) meaning that rates, riders, and tier thresholds often vary by location.

The prices presented on this page reflect our modeled calculations based on publicly available rate data, and are accurate as of March 11, 2021.

Electricity bills were calculated based on the total price charged to consumers, exclusive of sales tax. This includes basic monthly and variable energy charges, as well as appropriate riders, fees, adjustments and provincial rebates (NT, NU, ON). All provincial rates apply to the urban-residential rate class (or equivalent, specifics given in provincial sections below). All territorial rates also include rural and thermal rate classes to reflect the high proportion of communities living under these conditions.

Only utility companies serving a material proportion of the provincial or territorial population were considered. Both simple and weighted averages were used, depending on the relative proportion of people served by each utility. Only base rate structures were used, special and optional pricing programs (clean energy, long-term, fixed-rate) were not considered.

This year, we compared our results to Hydro-Québec’s 2020 electricity price study. Our final calculated prices vary from Hydro-Québec’s results by 0-23%. Of course, variation is expected given differences in study time frame (March 2021 vs April 2020) and coverage (provincial average vs single cities) between our studies.

For example, Maritime Electric in Prince Edward Island recently increased their rates (contributing to our higher calculated prices). In most cases, the difference is simply explained by the fact that we used rates from multiple provincial utilities in our calculations.

N/A = “not applicable” or, in the case of Nova Scotia, “not available”.

Our model is based on energy rate data published by the Alberta Utilities Commission. The retail energy rate was calculated using a simple average of all monthly regulated rates (un-capped) in the previous 9 months for Direct Energy, ENMAX Energy, and EPCOR Energy.

In previous years, we performed a bottom-up calculation to capture the average cost of distribution charges, transmission charges, rate riders, local access fees, administrative charges, and other adjustment riders. This year, we took a simplified top-down approach and based our calculations on the “typical electricity bill in Alberta“. We then made assumptions for the portion of these fees that were fixed and variable before coming up with our final calculated values.

We used the tiered residential rates from BC Hydro and Fortis BC to calculate prices in BC. Both utilities bill on a 60-day period, so fixed customer charges and tier thresholds were divided by 2 to arrive at monthly numbers. Each utility was weighted equally.

For our calculations, we used the standard residential rate data published by Manitoba Hydro.

The average residential cost of electricity in Newfoundland and Labrador is $0.138 per kWh, or $138 per month, assuming an average monthly usage of 1,000 kWh. This is the same price as it was in 2020.

We used the residential rates published by Newfoundland Power and Newfoundland Labrador Hydro in our calculations. Each utility was weighted equally.

All data came from domestic rates published by Nova Scotia Power, the Fuel Adjustment Mechanism was also taken into account.

To calculate rates in the Northwest Territories, we used a weighted average of price data published by the Northwest Territories Power Corporation and Northland Utilities. To account for the Territorial Power Support Program, our model effectively uses tiered pricing with a threshold of 800kWh per month (the average of the two seasonal allowances). Appropriate adjustment riders were accounted for. Both hydro and thermal rates were used.

Our calculations used an average of all community prices published by Qulliq Energy Corporation, and take into account the Nunavut Electricity Subsidy. The subsidy threshold was averaged between the two seasons.

Our model uses the time-of-use rates published by the Ontario Energy Board and assumes that 68% of consumption happens off-peak, 18% mid-peak, and 18% on-peak. We also take into account the updated Ontario Electricity Rebate.

For our calculations, we used the tiered residential urban rates published by Maritime Electric.

The tiered residential rates published by Hydro-Québec were used for our calculations. We assumed uniform daily usage.

There are three major utility companies that serve electricity in Saskatchewan: Saskpower, Saskatoon Light and Power, and Swift Current Light and Power. Rates vary slightly by utility and in our calculations, we took the average of all three. Standard city residential rate classes was used.

For our calculations, we used the rates and riders published by Yukon Energy and Atco Electric Yukon, excluding the rates for Old Crow. All three price tiers were used in our model.

energyhub.org is licensed and protected under Creative Commons (CC BY).

21 thoughts on “Electricity Prices in Canada 2021”

energyhub.org is a great reference source for Canadian clean energy information. 🙂 Why not:

• Bookmark this page and come back later.
• Send the link to a friend, classmate, or co-worker.
• Reference us in your paper or presentation.

energyhub.org is a social enterprise with a legal requirement to operate in a socially, environmentally, and economically responsible way. We offer free resources to consumers and various services to industry partners.